From the Autumn 2016 issue of Living Bird magazine. Subscribe now.

Perhaps it’s their large size and penetrating predator eyes. May­be it’s the way they soar high in the sky, seemingly without a care in the world. Whenever we encounter rap­tors, these mesmerizing birds compel us to take a good long look. And the longer we look, the more we’re inclined to wonder: what bird am I looking at?

Incredibly, experts can key in on what appears to be the tiniest speck in the sky and call out “Red-shouldered Hawk” or “Golden Eagle,” while oth­ers might struggle just to lay eyes on the speck in question. It takes years to get to that level, but there is no sorcery involved—just a lot of practice. These raptor masters are focusing on a few key features that separate one species from another.

“The average person is tempted to look at plumage and size, but the first thing I look for is the shape,” says eBird Project Leader Brian Sullivan, a lifelong lover of raptors and coauthor of the Crossley ID Guide: Raptors. “By focusing on the shape of the tail and the wings, you can often get enough information to quickly put the bird into a group.”

At a basic level, buteo hawks have round­ed wings and short tails while accipi­ter hawks have rounded wings and long tails, and falcons have pointed wings. But once you estab­lish that you’re looking at a buteo, what clues set a Red-shouldered Hawk apart from a Broad-winged Hawk? Or a Swainson’s from a Red-tail? You can learn a lot by looking at subtler aspects of shape and flight behavior, says Sullivan.

“At first glance, soaring Red-shoul­dered and Broad-winged hawks look pretty similar. But look at the way the bird holds its wings when gliding. Red-shouldered Hawks arch the lead­ing edges of their wings forward a little instead of holding them straight out.”

Sullivan says that difficulties arise when things like wind and behavior come into play. “Shape and flight style can vary greatly depending on what the bird is doing, and the conditions in which it is doing it. For example, a Red-tailed Hawk in a dive can appear to have pointed wings and a narrow tail, so that it superficially resembles a falcon.”

To advance to the expert level, says Sullivan, “there is no getting around lots of field practice.”

Fall is perhaps the best time of year to observe a large variety of hawks, especially at one of the hundreds of daily hawk watches that occur during fall migration at locations around North America. Thousands of hawks funnel through these geographic hotspots, and a hawk watch site will always have at least one, and likely several, experts on hand. Many are happy to explain how they make those impossibly distant IDs.

Spend some time at your favorite vantage point, and those specks in the sky will seem closer each day. 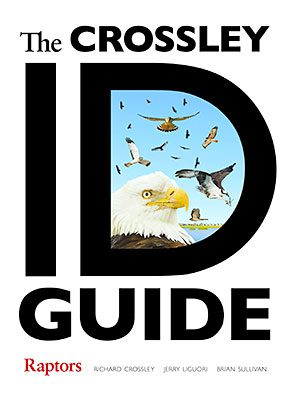