From the Autumn 2017 issue of Living Bird magazine. Subscribe now.

How do you capture a snapshot of evolution as it’s happening? Scientists look for those rare instances when a species suddenly diverges, or “radiates” into multiple forms, each with a different appearance or behavior. The most well-known example is a group of more than a dozen finch species in the Galapagos. They were made famous by Charles Darwin, who developed his theory of evolution in part by studying the birds. From one ancestral species that colonized the remote island chain, many new finch species evolved with differently sized and shaped beaks to exploit the foods available.

Now, another group of South American finches known as “capuchino” seedeaters is helping scientists learn about how, and how fast, evolution works. While it took more than 2 million years for Darwin’s finches to evolve into their present forms, nine capuchino species (in the genus Sporophila) have appeared in the last 500,000 to 1 million years. In evolutionary terms, that’s life in the fast lane.

“We can learn a lot from these instances of fast speciation,” says Cornell Lab scientist Leonardo Campagna, who has studied these finches for 10 years. “They can help us get to the root of how biological diversity has evolved.” Campagna and collaborators were the first to show that this finch radiation is relatively recent and still ongoing. What really fascinates him is how male capuchinos can look and sound very different across species, despite being almost identical genetically. The latest findings, published in the journal Science Advances, suggest the differences may depend on just a few genes with an outsized role in the evolution of the birds’ appearance.

The male finches are the same shape and size but wear different combinations of about five colors. Where the Dark-throated Seedeater has a black throat, for instance, the Marsh Seedeater’s throat is white and the Tawny-bellied Seedeater’s is the same tawny color as its belly. There is similar variety for wings and head color, creating an almost mix-and-match effect when the species are viewed side by side. Their songs are different, too.

“The males’ songs are in the same general frequency, but the phrasing is quite different,” Campagna explains. “One species might have trills in different places, another song might be buzzy. They’re very easy to distinguish.” (Listen to recordings from our Macaulay Library archive: Dark-throated Seedeater, Marsh Seedeater, and Tawny-bellied Seedeater.)

And yet, at the genetic level they are up to 99.97% identical. So, how can the males all be so different?

Because so much of each species’ genome is the same, Campagna says it’s easier to find the minute differences, making them great subjects for study. The new study identified all the points of difference for nine capuchino species, with a surprising result. The differences consistently fell in areas near color genes in sections of the genome once considered “junk.” Scientists have since learned that these areas of the genome, which once appeared to have no purpose, can play crucial roles in regulating genes and modifying their effects.

This so-called “junk” DNA does not actually create proteins, but may influence how nearby genes are used. It’s rather like two cooks using the exact same ingredients for spaghetti sauce, but using a different recipe, varying when and how much of each ingredient is added, so the two sauces taste quite different.

In the New York Times 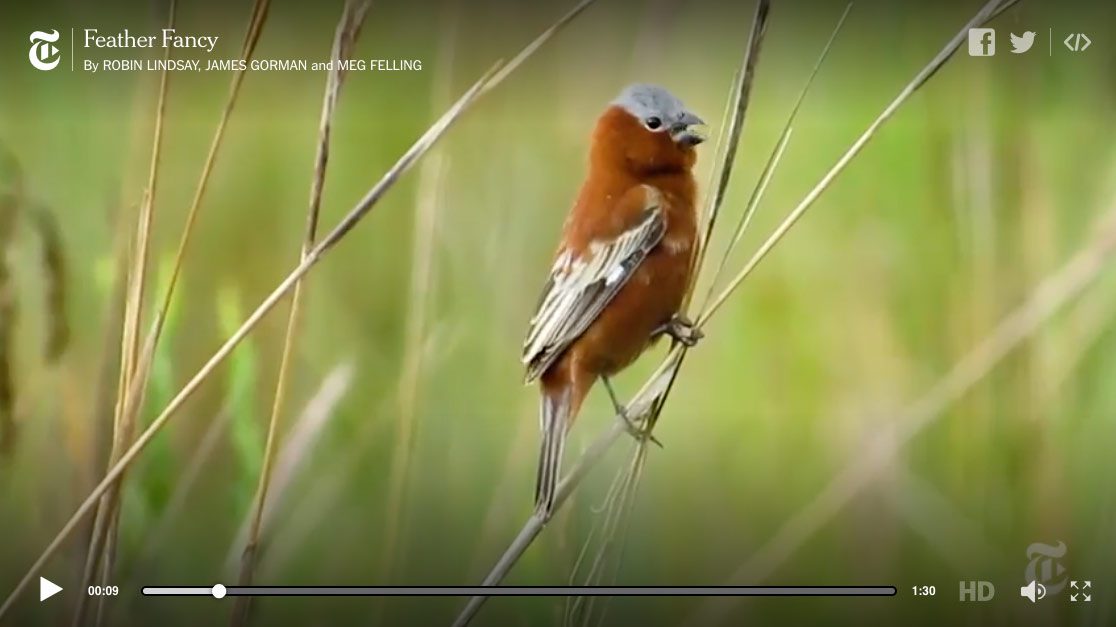 Learn about capuchino evolution in this short video and article from the New York Times.

“We have the same building blocks, but the instructions on what to do with those building blocks are different among the finches,” says Campagna. “The different color genes could be turned on at a certain time, or turned off, be slightly on, or slightly off. It’s possible that in these rapid radiations, what’s changing is when and how much of these ‘ingredients’ are being added.”

The outcome of each genetic bird recipe is a capuchino finch that looks different—one species with a black throat and gray cap, another with a white throat and gray cap. And instead of requiring large changes to the DNA to govern color production over many parts of the bird’s body, it has been accomplished through just a few changes to regulatory regions of the genome.

Unlike Darwin’s finches, in which environmental conditions such as food supply rewarded birds with different beak shapes, the capuchino finches all eat the same type of food and live in grasslands scattered across South America. Some force other than environmental conditions must be acting upon the males to produce so many species. Campagna thinks that force comes from females as they choose among competing males based on color and song.

Of course, the source of that female preference probably resides somewhere in the DNA, too. But it may be a Herculean task to find out. That’s because females of all the capuchino species look identical—it’s often impossible to tell them apart, even in the hand. And their choices may not be entirely governed by genetics. Campagna points out that to a certain degree there may be a “cultural” element involved, too—a female picks a bird colored like her father or other relatives.

Because scientists are witnessing capuchino finch evolution in mid-stride, the outcome is still a mystery. Current forms could continue to diverge into ever more distinct species or they could collapse back into one or a few species through hybridization or extinction. Right now, they’re considered separate species because the color and song of males keep them from widely interbreeding. But if the males—or the preferences of the females—were to change, the species are still closely enough related that they could probably still mate successfully.

Campagna says, “What we’re learning from these studies is that you don’t need to be different across the entire genome to look different and behave differently. Which genes are different among species is more important than just the number of genes that are different.”